I suspect that every book has a story behind it; certainly all my novels do. The way this book came about took me by surprise. After I finished touring for The Same Sweet Girls, I began imagining characters, situations and plot ideas for my next novel, thinking I’d begin a story that had been brewing in my mind, having to do with the changing landscape of the South.

I was distracted, however, by a family situation that was becoming more and more alarming. My youngest sister was having marital difficulties, and I urged her to call me anytime, day or night, when she needed to talk. I’m the oldest in a family of three girls, and we are unusually close. I was twelve when my youngest sister, Nancy Jane, was born, and I lugged her around and spoiled her as though she were a beloved doll, come to life. When I entered my teens, my girlfriends and I kept it up, once teaching Nancy Jane, age four, to “read” Shakespeare. We told everyone she was a prodigy as she faked it, jabbering away in what sounded like Elizabethan English as her pudgy little finger moved down the page. Few of our classmates, who were mostly farm kids, knew Shakespeare, so they were easily impressed.

From the beginning, Nancy had seemed like a special blessing to the family because of the trauma of her premature birth, when we were told that our mother’s life was in danger and there was very little hope of the baby’s survival. Nancy not only survived but grew into a beautiful, smart, and spunky young woman. When she married a man the family adored, and after years of fertility difficulties, had a son, I couldn’t have been happier. During the following years, their close-knit family of three seemed idyllic, and Nancy and I grew even closer. But as I began the process of plotting my fourth novel, my sister’s happy home fell apart. During the agonizing months leading up to her divorce, I had to remind both myself and Nancy that she was a survivor because at times, I didn’t think she would.

At this point, my novel took on a new direction. Out of the helplessness I felt when confronted with my sister’s pain , I decided to write about the havoc and heartbreak caused by divorce. I envisioned a story other than the tried-and-true “By overcoming many obstacles, newly-divorced heroine finds herself,” but I was at a loss to come up with one.

Then life brought me a serendipitous happening: At an author luncheon in Atlanta, I signed a book for a lovely, 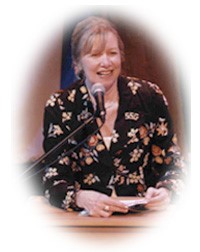 dynamic woman who told me she had founded an organization which conducted support groups and recovery retreats for separated or divorced women. “Don’t leave,” I told her. “I want to send my sister to one your retreats.” At the time, I was simply seeking help for my sister, but driving home from the luncheon it hit me—I had found my novel.. The main character would be a woman, a therapist, who has dedicated herself to helping others survive the trauma of divorce. What a life she would lead, dealing daily with the tragedy of broken homes and broken lives! What a strong character she would have to be, especially if a situation arose where she struggled to help someone she loved, a friend or family member, and how intriguing it would be to explore her inner struggle. But even more so, what if this same character had her own demons, her own unresolved heartbreak? Given all that, she would surely be seen as the Queen of Broken Hearts. I could barely wait to get home to my writing desk, and try to make such a woman come to life. But first I placed a call to Nancy Jane : “You are going to a divorce recovery retreat, and I’m going with you to do research.” Research for what, she responded with a trace of alarm in her voice, and I said, “Fasten your seat belt, baby sister. You’re about to become a character in my next book!”